Gage’s 21st Birthday: Living in Joy and in the Moment

It’s been a busy year for Gage.  He continues to be a shining light in our lives and is the happiest child ever!

Gage is a pioneer in the medical world!  He’s the first NGLY 1 patient to have hand surgery on both hands to open his fingers again.  The degenerative nature of the disease had made his fingers curl so tightly, it was hard to even cut his nails.  Despite our best efforts of hand splints, specific hand therapy, and regular massages, the fingers are curling again.  His hands still are ‘functional’ for him, but surgery may be something we have to do again if his fingers continue to curl.  This information is important for other NGLY families to know as it pertains to their children’s hands. 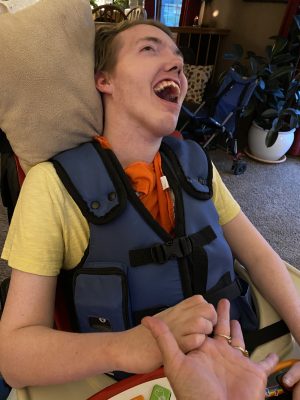 Gage has been busy this past year at school learning how to drive his power wheelchair and utilize a head switch to make choices and communicate his needs and preferences.  During Covid, he was at home continuing his learning and therapies either through his mother or zoom sessions with his teachers.  He certainly missed his school setting and teachers a great deal.

Prior to Covid, Gage had the opportunity to swim with dolphins and ride a lazy river while vacationing in the Bahamas last October while his mother gave a presentation to one of the nations leading genetic sequencing companies in the world.  We were able to spend quality time together checking things off of his ‘bucket list’ and just enjoy ‘being present’ together!  It was everything we could have asked for and more! 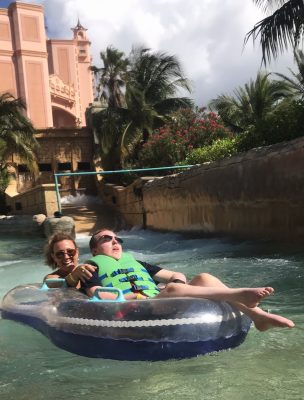 Gage also got to witness his hero, Jon Crosby, complete an Ironman in Louisville, Kentucky.  Gage met Jon through a website called IRUN4MICHAEL which pairs runners up with kids with disabilities for inspiration and connection.  Jon has been running for Gage for the past few years, and Gage attends as many of Jon’s races as possible.  He and his wife, Jaci, are God-sent and perfectly matched with our family.  Jon says Gage gives him energy to persevere…we tell Jon he inspires us! 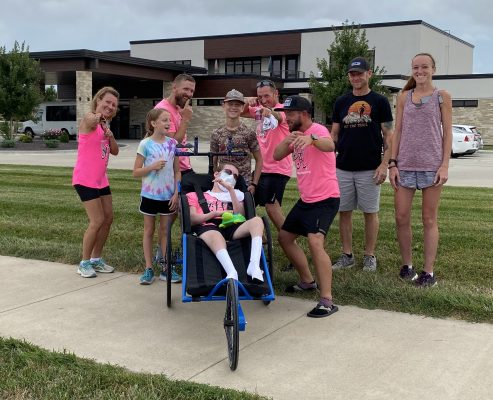 Gage was present to cheer his mother, Jennifer as she completed her first Ironman 70.3 in Arizona this past October.  Gage and his dad, along with other family members, were there to watch as she swam 1.2 miles, biked 56 miles, and ran 13.1 miles in 7 hours and 49 minutes coming across the finish line with a smile!  Gage held a cowbell and rang it with his dad and family as Jen and her sister Susan competed together.  Someday, Jen and Greg both hope to complete an Ironman with Gage…pulling him as they swim, towing him while they bike, and pushing him while they run.  Another NGLY 1 warrior mother, Sara,  has completed an Ironman, and together they may have to do an NGLY 1 Team Ironman with their children.

Today, Gage turns 21 and will graduate from his school.  He’ll have a cap and a gown.  He’ll receive a diploma.  There will be banners, cupcakes, and tassels.  His teachers, aides, therapists, and school staff have become our family.  Each one of them has mattered in his life in the most profound ways…some have been with him since he was an infant.  They know him best and have yielded the most out of him.  We will miss them terribly…but as a family, we look forward to checking off all of the wonderful ‘bucket list’ items coming up. 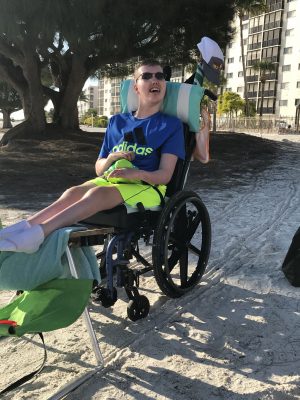 In the meantime, last summer Gage was awarded a Hoyt jogger through Variety the Children’s Charity and Greg and Jen have been logging the miles while staying home and safe.  In their quiet neighborhood, they walk, jog, and bike with Gage regularly…recognizing time is of the essence while facing NGLY 1.   A cure can’t come fast enough.  They know that when a cure is found, it will be because of the blood, tissue, and muscle Gage and the other children have donated.

Some parents get to say their children are doctors or lawyers, or have won the Heisman trophy…we will someday get to say our son was a pioneer in helping to find the cure for a disease.  For now, we live in joy and in the moment.  We take nothing for granted…and while we’ve never heard Gage speak, we dream of it often.  It fills us with joy and we celebrate the small things every chance we get.

We choose to be sad later…